In late November we went to Centre Parcs for a small holiday. It was really fun. As normal the bit i enjoyed most was the cycling. I always get a Trike and take great pleasure in playing postman!

When i got home i was thinking about cycling a lot. I enjoy cycling and own two bikes, but it has been rare for me to ride. I cover at most a few hundred miles per year. Its more than nothing, but not anywhere near enough to make any impact on my health.

Inspried by Centre Parks i started thinking about what i could do to making cycling around near home more sustainable. The bike experiment was born.

All good science starts with a hypothosis to test. Or at least that’s why my GCSE science teacher told me. With that in mind, the hypothosis i want to test is:

“Is the fear of getting my bike stolen a barrier to me riding my bike more? If i reduce the chance and impact of theft, can i increase the amount i cycle in a sustainble way?”

Let’s dig into a bit.

First up, I don’t think fear of my bike getting stolen is the biggest or only barrier to be cycling. Fitness and spoons certainly play a part. However, fitness and spoons are hard to change over a short period.

Second, I’m interested in combining two things. Reducing the change of theft (eg, better security) and also the impact of theft (less monetary / emotional loss). Doing one or the other is easy enough, but i wanted to find a solution which modified both together. This isn’t strictly science… but nevermind… I’m also not a scientist ;)

Finally, I’m interested in a change in how often i cycle and how sustainable it is. If the change is positive but not sustainable then i would consider the hypothosis to be false.

For this experiment, i had a pretty good idea of what the ideal bike would be. It would have the following properties:

Based on this i set up some eBay and gumtree alerts and waited to see what came up. After a few days, i had a candidate bike. The bike is a “Trax TRI 1”, but we call it “TRAX” for short. 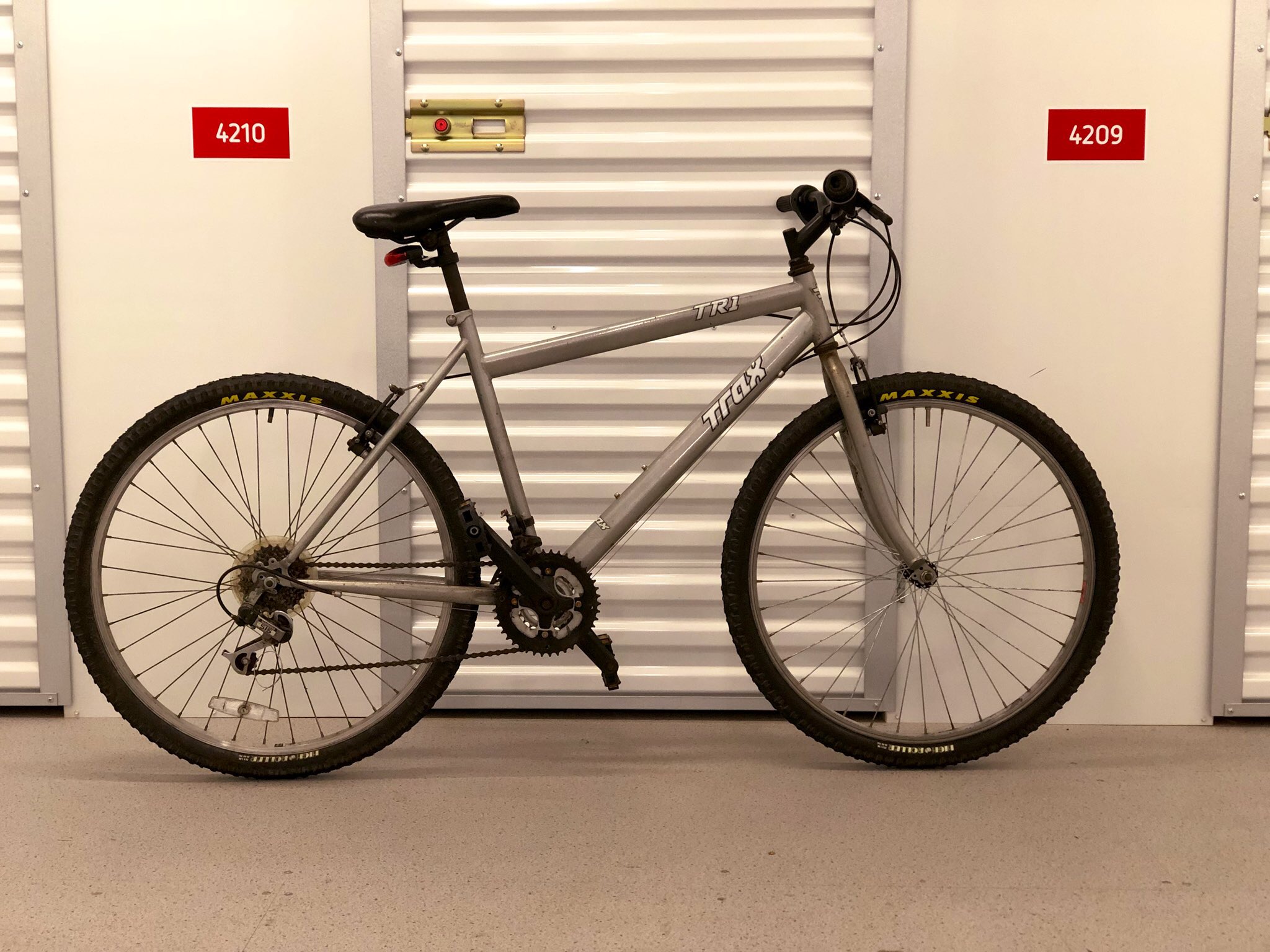 Trax is a good fit for my needs. It is the right size, cheap (£30) and the bolt on wheels and seized seat post made it easy to secure. As a rigid mountain bike its not the most efficient, but its not bad. A 700c sized hybrid would have been better, but they seemed to demand a price premium beyond my budget.

After a quick chat with the seller to check the details we drove over to them and i paid the £30 asking price. The only work is needed was a replacement gear cable and a little bit of fine tuning.

The results so far.

I don’t think a month is long enough to draw any strong conclusions. I need to see what the longer term trends are. However, the early signs are tended towards the positive. I have been recording rides using my watch in order to keep track of the data.

In the month since i got the bike i had ridden ~38 journeys on it. In the 11 months prior to getting the bike i averaged 3 journeys a month. Distance isn’t hugely important to be, but that saw a healthy jump as well. I cycled 41km in December versus and average of 6km in the months before.

That’s about a 12x increase in trips!

I suspect over time the difference will drop. I am excited about the bike so riding it more and some of the rides have also be due to the bike (Ed, 2 trips where to and from the bike shop for a cable!). It’s encouraging enough that i will keep going.

While not a goal i had in mind, i think the bike has also made back the original investment in saved bus fares. I’ve also had fun with it and felt more able to explore the area near my home.

I like these sorts of experiments. Learning ways to make my life more fun and to have safe and sustainble adventures is important. I could easily end up stuck in my flat spending my whole life working.

I don’t cycle the bike all that far (into and out of town mostly) but being able to do so whenever i want to at my own pace is exciting. It’s not quite as cool as it is at centre parks, but it is still very cool!